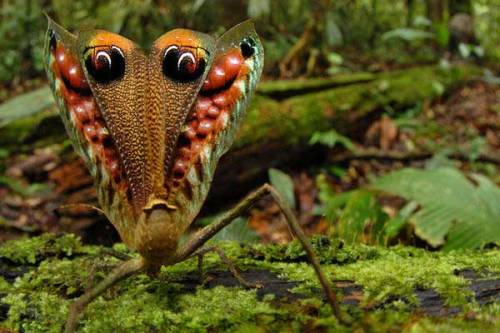 The peacock katydid is about 45 to 65 mm in length, for the adult male and female insect. And surprisingly, no two individual insects are identical in their prints, color pattern or shape of wings. This is aimed to distract the predators by not having a fixed shape or visual pattern to recognize in nature. 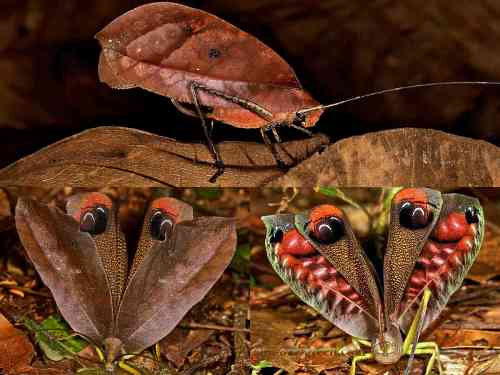 Like other katydids, the hearing organs are located in the front legs, below the joint and between the arthropod leg segments. The antennas are long, estimated as three times the length of the insect.
These species of insects live in tropical regions, where monkeys are considered their first enemy who searches for the katydid by sorting the dead leaves….’intelligent manner’!
They eat fresh leaves, plants and animal detritus.

The mating behavior of these peacock katydid insects is very interesting as well. The male attracts the female by rubbing one fore wing into a special scraper in the other, this is supposed to produce a sound call that is estimated as double the echolocation produced by bats. 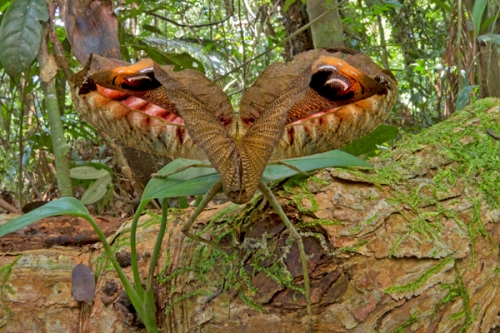 When the female approaches they inspect one another by touching their antennas and then compare the size and strength by extending wings and shaking their bodies. If the male doesn’t hesitate or go away, the female approaches and they couple for a few hours to mate.
The mating happens when the male produces a gelatinous secretion that contains sperm cells, proteins, carbohydrates and other nutrients that contribute in female and offspring survival as it exceeds 20% of the male’s body mass. Once the ‘spermatophylax’ reaches the females ovipositor, they separate.